Today, I'm going to explain the differences between different types of guitar construction. There are three main types of acoustic guitar construction that pretty much every instrument is going to fall into the category of. Those three categories are all solid wood, solid top, and all laminate. Today I'm going to be referring to the body of the instrument, which is the largest portion of the instrument. Acoustic guitar bodies are composed of a soundboard, or top of the instrument,sides and a back. Solid wood refers to single layers of wood thick. Laminate wood refers to multiple layers of wood glued together. The difference in these makes a huge difference in how your instrument is going to sound- in the beginning and down the road.

Musical instruments, as they're played, and as they're vibrated- if they're made out of wood, are going to improve and "open up." When an instrument opens up it basically vibrates easier and easier depending on how much it's been played. So, some people say "instruments improve with time," which is partially true. With time they will dry out and improve in some ways and sometimes guitar companies use old wood because it does sound better if it has been "cured," but really an instrument is improved when it vibrates. It starts off with potential and then its potential is amplified based on what its construction is.

So, let me explain the difference between these three different types of construction. All solid wood means a single layer wood on the top, on the back and on the sides. These are the most sought-after instruments for professional use- the reason for this is that they are going to vibrate the easiest, they're going to transfer the vibrations to the strings the easiest, they're going to sound the best right off the bat, and they're going to improve the most down the road. These are the preferred types of instruments typically for professionals- or anybody who just really wants a better sounding instrument.

The third type of guitar construction is all laminate. All laminate instruments are made from multiple layers of wood glued together, or an epoxy sawdust composite, all the way around the body. The advantage of this is that they are going to be much, much more durable as laminate wood is more durable; however, it does not sound as good typically as solid wood because it does not vibrate as easily. Some companies use a very thin laminate, and those thin laminates can sound pretty good, but I have yet to find in all laminate guitar that sounds anywhere close to an all solid wood guitar. I have found old laminate guitars that have opened up- because they do open up- that sound as good as solid top guitars and even solid wood guitars that are new.

I'm also going to explain the difference between saddle and nut. The saddle and nut are going to be the direct contact points with the strings and the rest of the instrument, and because of this the material that's used is going to make a huge difference in tone. Bone has traditionally been used in high quality instruments because of its ability to transfer vibration extremely well. Plastic and other composite materials have been used in more modern instruments and typically don't sound as good. There are some exceptions to that- micarta and corian and graphite and a couple other materials such as tusq can sound comparable to bone and they do have more consistent transfer of vibration than bone; however, they typically don't sound as clear and the reason for that is that bone transfers vibration easily because it's a very very hard material- whereas plastic is usually a softer material and because of that it's going to dampen the sound a little bit. 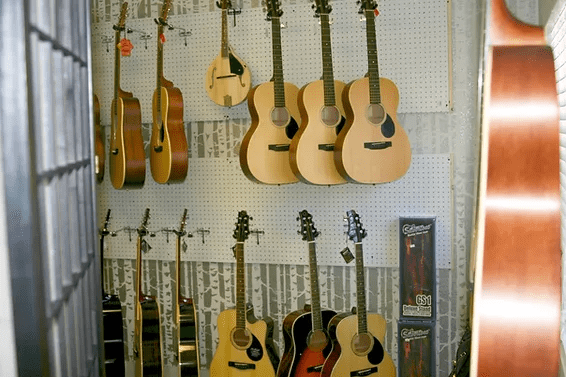